This is adapted from Dorie Greenspan's Baking : From My Home to Yours 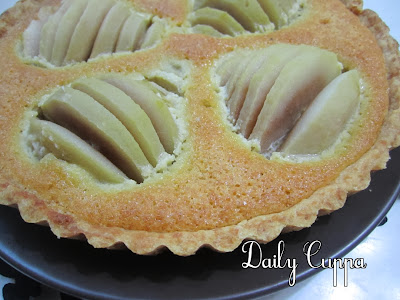 Combine all ingredients except the pears in a saucepan large enough to hold all the pears. Bring to a simmer over medium heat.
Peal the pears and add to the simmering syrup. Let pears poach about 10-15 minutes, turning the occasionally. Pears will become slightly translucent, tender and able to be pierced by a fork or knife. Turn off heat. Let cool to room temperature.

For the tart shell :

Put flour, icing sugar, salt in a mixing bowl and mix till incorporated. Add in small cubes of butter and rub in with both hands till u get a crumbly texture and butter is mixed well with flour. Add in egg yolk and combine together till dough becomes clumpy. Do not make it into a ball. Just mix till it is sticking together.
Butter a removable base tart pan. Turn the dough out onto the pan and press the bottom towards the sides till dough covers the pan easily. Make sure dough is even on the pan. You can patch dough on areas needed. Cut of ends with a butter knife. Once shell is done, place in freezer for about 15 minutes.
Then remove tart shell, take a piece of foil and butter the shiny side, then press the buttered side tightly to the shell. Place the tart pan on a baking tray and bake for 25 minutes at 180C.
Once done, remove pan, remove the foil and let it cool.

Combine butter and sugar with a hand held mixer. Add the ground almonds and blend together. Add in the flour, cornstarch, and then the egg and egg white. Beat in low till smooth. Add in vanilla, just to blend.

Once the shell is cool, Pour the frangipane and spread evenly.
Drain the pears. Pat dry with a kitchen towel. Cut into halves, remove the core with a knife and spoon. Then cut crosswise into 3/8 inches thick. Do not separate the slices. Slide a knife or spatula underneath the pear halves and transfer them onto the tart.
Arrange all pear halves evenly (as in pics).
Place tart in a baking sheet and bake for 40-45 minutes or till golden brown and frangipane is firm to touch at 170C.

Once done, remove pan and let it cool before removing tart base from the pan. Slice the tart and serve with a scoop of vanilla ice cream or dust with some icing sugar. 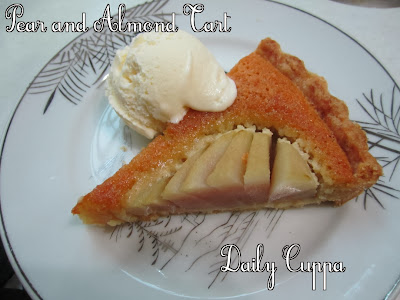 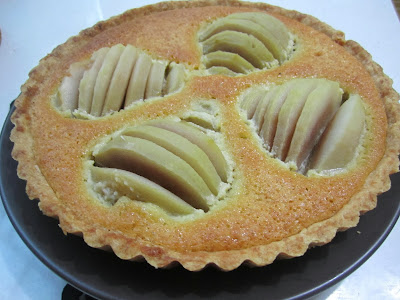 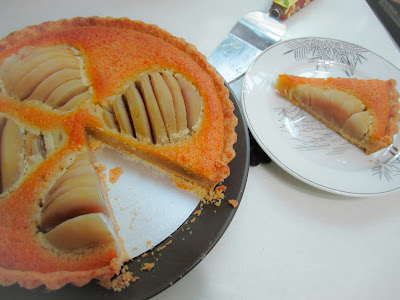 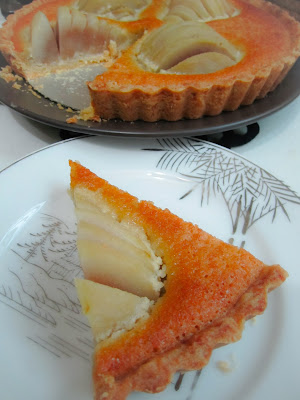 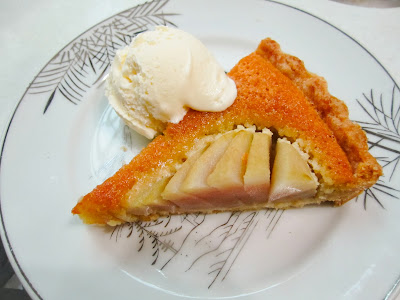 Linked to my ongoing event : 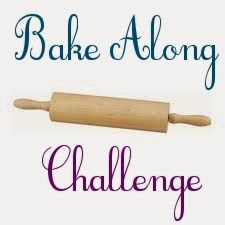